After years spent in constant development, the famous Italian supercar manufacturer Lamborghini revealed their first hybrid production car., called the 2022 Lamborghini Sian. This stunning “hybrid super sports car” uses the technology from both the Asterion and Terzo Millennio concept cars, and fuses them into a limited-edition production model that will debut at the 2019 Frankfurt Motor Show starting this September 12. The Sian is also set to show off Lambo’s new design touches. What is the most important thing is that this is the fastest and the most powerful Lamborghini car ever produced! Read on to learn more about it.

A Countach from the Future 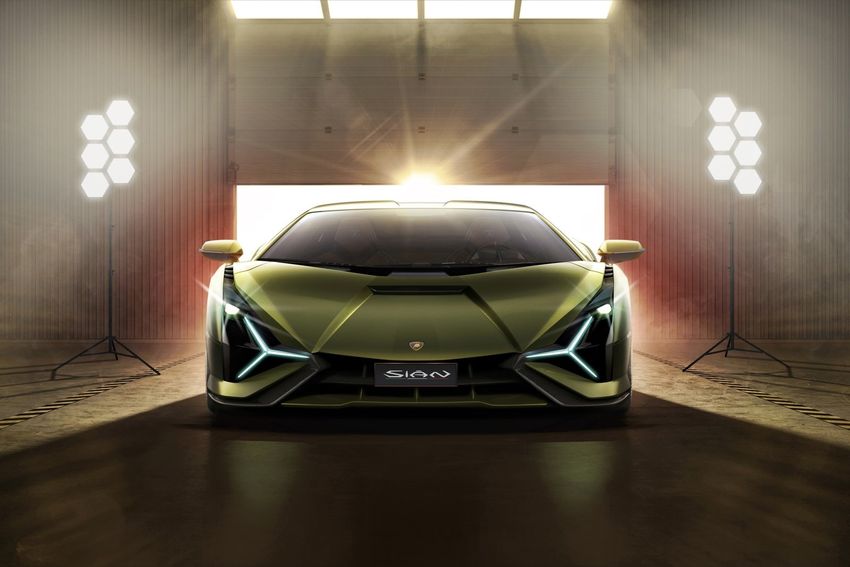 Right from the first glance, it is easy to see that the Sian is a completely new design, which does not share any of the features that the currently existing Lamborghini models utilize. However, true Lambo experts will notice the angular lines reminiscent of those present on the Aventador and Huracan, as well as the overall design cues inspired by legendary Lamborghini Countach. One can say this is a futuristic approach to the Countach, with a modern touch.

At the front of the car, the same V-shaped nose is present, something all contemporary Lambos have. Still, it is unique, because the headlamps occupy more space than usual. The lights are Y-shaped, which is another Lambo trademark, but they are placed horizontally with the base of the letter Y starting from the bumper grille. While one of the arms extends towards the lower fender, the other moves up and stretches towards the edge of the hood. Atop of the LED arms are larger, round LED lights. 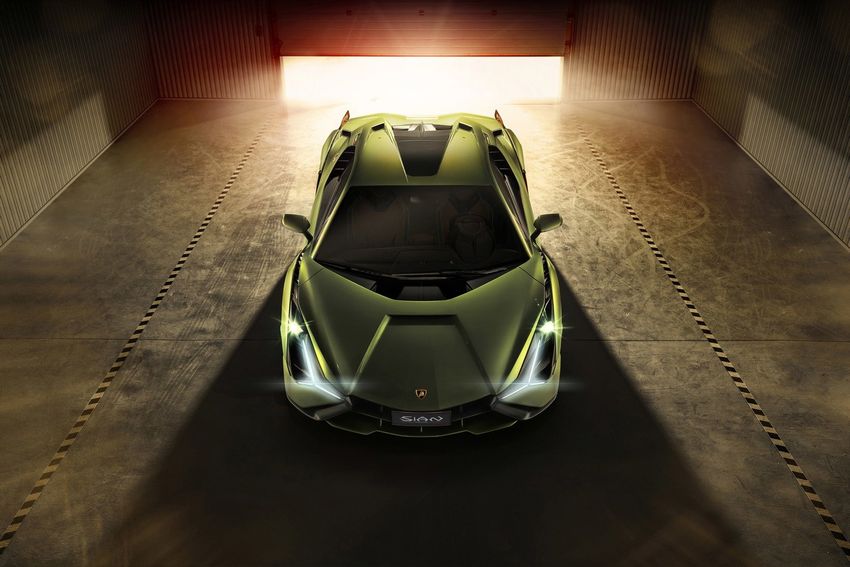 Moving on to the bumper, it is somewhat familiar from the other models thanks to the two winglets located on each side of the bumper vent. Underneath, there is a three piece splitter. The winglets and the headlamps all feature a carbon fiber trim. There is a big V-shaped dent on the hood, while the bottom is flat with the open part oriented towards the nose. This is perhaps the biggest nod to the iconic Countach, a fierce car that has a small front hood that shares a look just like this. The windscreen is yet another Countach tribute, and another V-shaped design in the lower end.

The profile of the upcoming 2022 Lamborghini Sian coupe is a clever combination of aggressive and angular lines, with muscular and round shapes. The sharp nose as well as the rear fascia are coupled together with the very aggressive side skirts and rear fender vents, while the round arches of the wheels and the bubbly roof prevent the breathtaking sports car from being just another concept from the ‘70s. The NACA air inlets are present on the doors and they continue the trend of letter shaped design. They feature the trademark Y shape. The side windows are quite narrow, one more tribute to the Countach. This design feature makes the cockpit look like the ones inside of jet fighters, which is a common trait among most modern supercars. Towards the back of the car, there is a set of carbon fiber winglets, connected to the upper rear fenders. 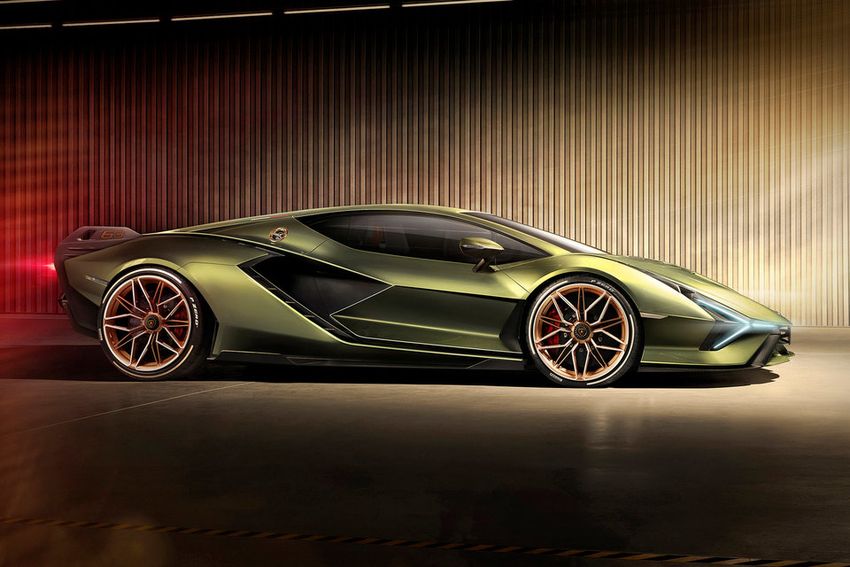 Although such elements suggest that the wing is fixed, the Sian lacks one, which does not make it any less aerodynamic or cool looking. The V-shaped glass on the rear hood is wider the more it moves to the fascia, only to start turning narrower just towards the edge of the deck lid. The taillights are a part of the massive triangular cutouts at both sides, one more thing that the fan-favorite ‘70s and ‘80s legend Lamborghini Countach inspired. The lights of the Sian are hexagonally shaped, compared to the squares its predecessor sported, but the overall arrangement is clearly borrowed.

Last but not least, the massive diffuser and the hexagonal exhaust pipes add that much more character to the exotic sports car. The presentation model sports the Verge Gea green shade, while all of the details are in Oro Electrum gold. Of course, the future buyers will be able to choose a variety of other color schemes. 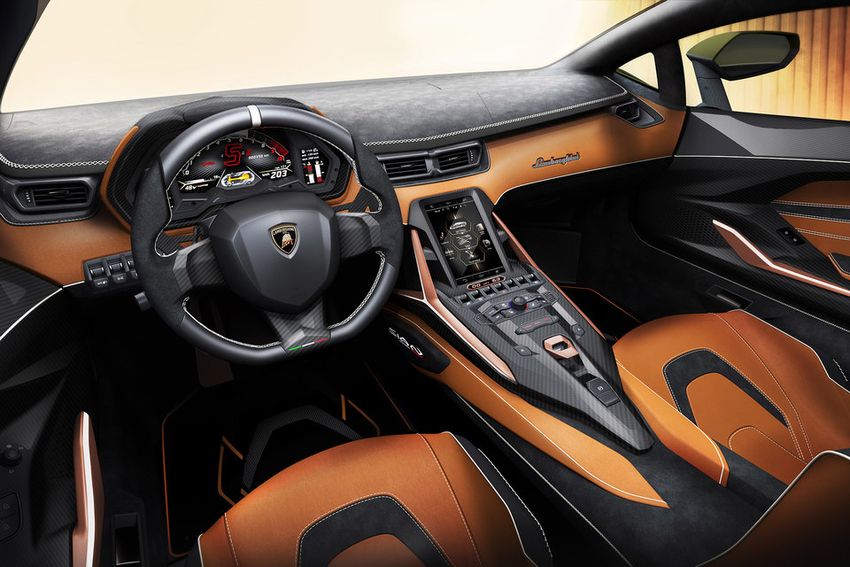 While the exterior is truly special, and a needed breath of fresh air that brings us a new generation of Lambos, the interior was treated with much less enthusiasm. This is mainly because the Italian experts borrowed most of the parts from the Aventador model. There are some notable changes and new materials present, but overall, this is only a slight improvement from the Aventador. The most noticeable of the borrowed designs include the dashboard, the center console, and the shape of the instrument cluster HUD. This is not to say that the range-topping supercar has a bad interior, only that it is practically the same.

Still, upon a somewhat closer inspection, you are able to see sleeker A/C vents, a redesigned vertical display, as well as a revised set controls of on the carbon fiber center console. The steering wheel is one more completely identical feature from the Aventador, however it now sports carbon fiber spokes and different Alcantara type on the areas where you grip it. The door panels are revised, and they now feature big carbon fiber parts. Also, the upper dashboard is another thing covered in fine Alcantara material.

Moving on, the Poltrona Frau leather upholstery is a special new design that features 3D printed parts, which is the first time it has happened in the automotive industry. Lamborghini opted for a two-tone layout, which combines black with burnt brown and a slight golden tint. The exposed carbon fiber elements as well as the white stitching do their best to differentiate the interior from the one present in Aventador models, and it does its job well. 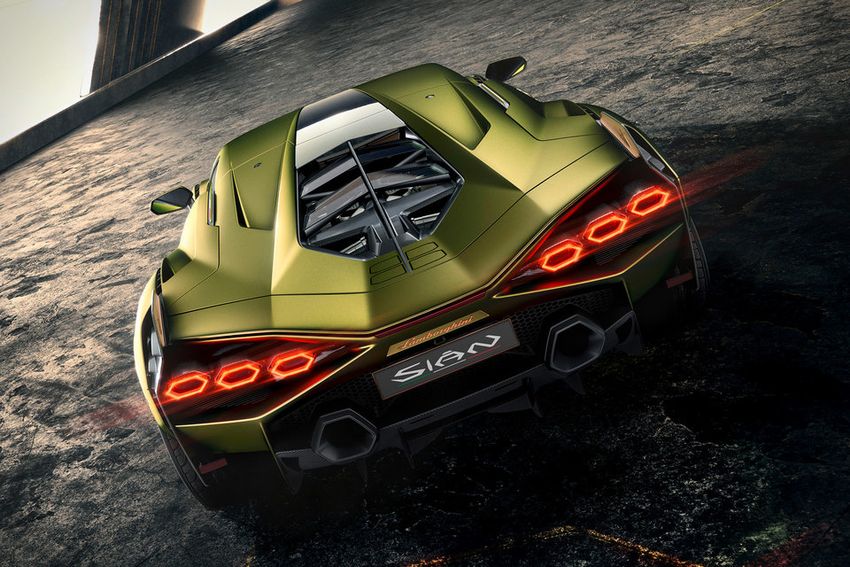 The Sian does remain true to the naturally aspirated 6.5-liter V-12 engine the Aventador uses, the Sian also uses a 48-volt system that makes it a mild hybrid. This technology was previously used and showcased with the Terzo Millennio, a Lamborghini concept unveiled back in 2018. Although this is not the first Lambo hybrid, thanks to the Asterion concept form 2014, it is the first production car with electrification by the famous brand. The Asterion featured a 5.2-liter V-10 instead of the best in the class 6.5-liter V-12.

The aforementioned 48-volt system is fully integrated into the gearbox, a feature that helps the car deliver an immediate response and a higher performance. What is more, the Sian also supports the low speed maneuvers like reversing and parking, meaning you will not burn too much gas while performing them. Another interesting fact is that the new Sian coupe does not use a traditional lithium-ion battery. 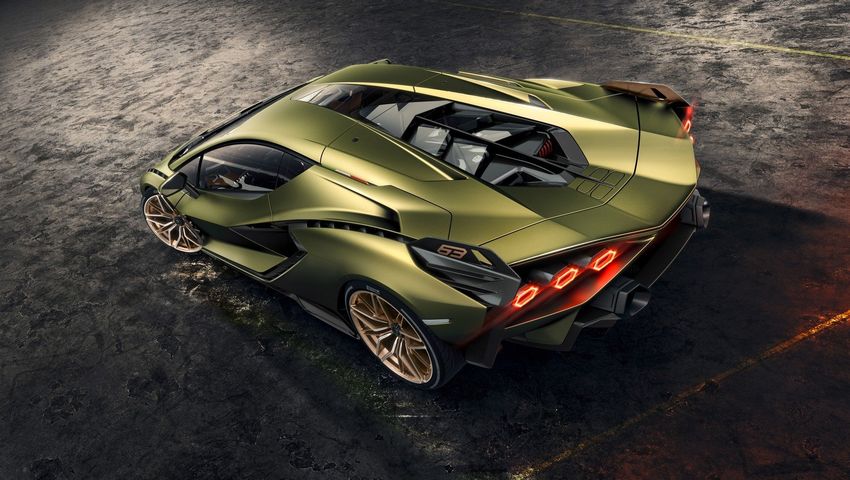 Instead of using the usual lithium-ion battery like other hybrids, the Lamborghini Sian has a brand-new supercapacitor. The Italian engineers first used this technology in the already mentioned Terzo Millennio concept in 2018. Since then, they have spent the year perfecting the modern technology for mass production. The supercapacitor gives the car many advantages.

First of all, it is three times more powerful than batteries that weigh the same. Next, it is also three times lighter than those batteries, eliminating the heavy battery problem of most hybrids. The supercapacitor only weighs 34 kg, or 75 pounds. Since it adds 34 horsepower, this combo means that the power-to-weight ratio is one horsepower per one kilogram, which is very impressive. Since it is so small, it easily fits between the cockpit and the engine, helping the Sian with the perfect weight distribution.

The Most Powerful Lamborghini Car Yet

We already said the Sian shares the 6.5-liter V-12 with the Aventador, but the car also benefits from the extra horsepower as Lambo made updates to the engine and increased the base output to 774 horsepower. This is 34 extra horses compared to the Aventador S, as well as 15 horsepower more than the Aventador SVJ. The torque has not yet been discussed, but it is safe to say this engine will manage to put out more than the 531 pound-feet of torque, which is how much the SVJ manages. 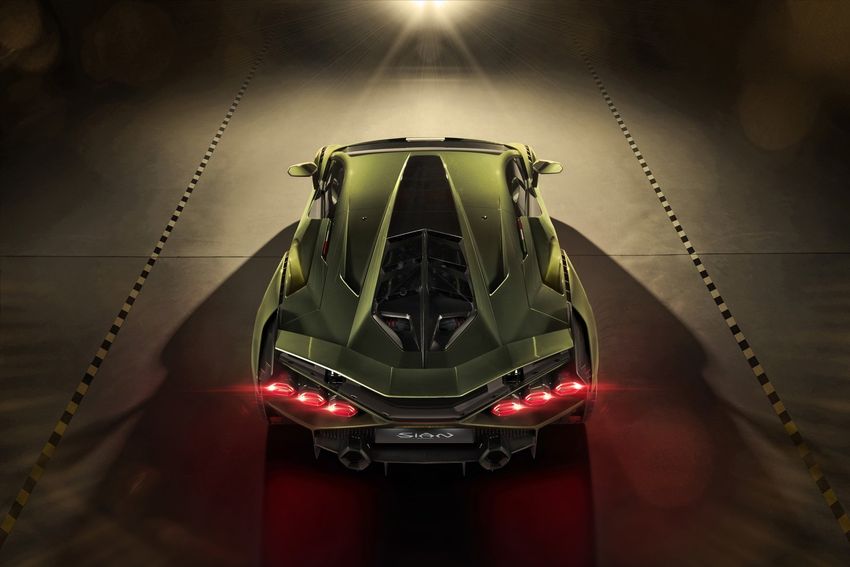 The 774-horsepower rating makes the Sian the most powerful Lamborghini car to be in production, but things get even better when the electric power is added to the equation. The 48-volt system that adds the extra 34 more horses helps the overall output reach an unreal 808 horsepower, which is now 68 more than the S and 49 more than the SVJ.

Last but not least, the top speed of the 2022 Lamborghini Sian is 217 mph or 350 km/h, the same as both the Aventador S and Aventador SVJ. The price tag for this supercar is $3.6 million.