Recently, we witnessed big automobile manufacturers like Ford, Tesla, and Rivian presented their newest products, electric pickups. Also, some of the smaller companies presented their shot at making electric trucks, like Atlis. However, they didn’t succeed in getting a lot of attention from potential customers.

One company teased their vehicle that is keeping at the edge of our seats for quite some time. The name of that company is Bollinger Motors. They revealed their new two vehicles B1 SUV and B2 pickup. Those who believe that this is just a copy of Rivian and Tesla products will be extremely surprised. Now, let us talk about these two vehicles in greater detail.

These two cars are not your average EVs that have a ton of features and gizmos, and it will not give you extreme amounts of pleasure at first sight. For example, the B2 pickup truck doesn’t even feature airbags, which are so typical for a vast majority of vehicles today. Basically, we are talking about two almost the same cars. The only big difference is body type.

Now we are going to talk about the features of these vehicles. 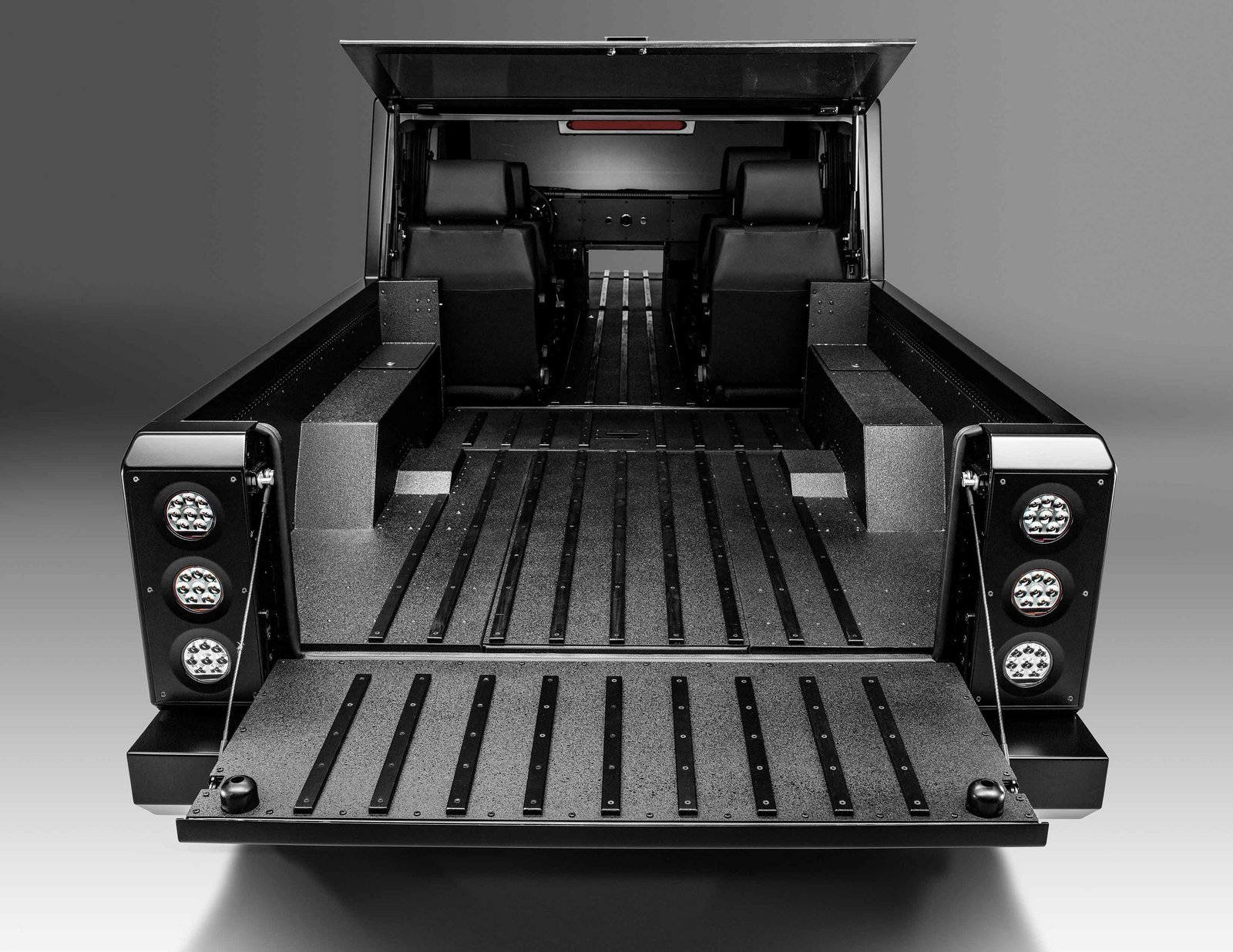 Probably the best thing about this vehicle is its storage-patent system. Its mid-gate located behind the rear seats can be flipped open and that can create a kind-of-space, long tunnel that goes all the way to the front trunk. Also, seats can be removed, which only adds to the overall capacity of this vehicle’s trunk.

This is really helpful in situations you need to move some plywood and long sheets that require more space than usual. While we are talking about the trunk, we should mention that opposite to the many similar trucks, this one doesn’t have a payload capacity that needs to be boasted of or a high towing. For example, B2 has a towing capacity of 7,500 pounds and a payload rating of just 5000 pounds. 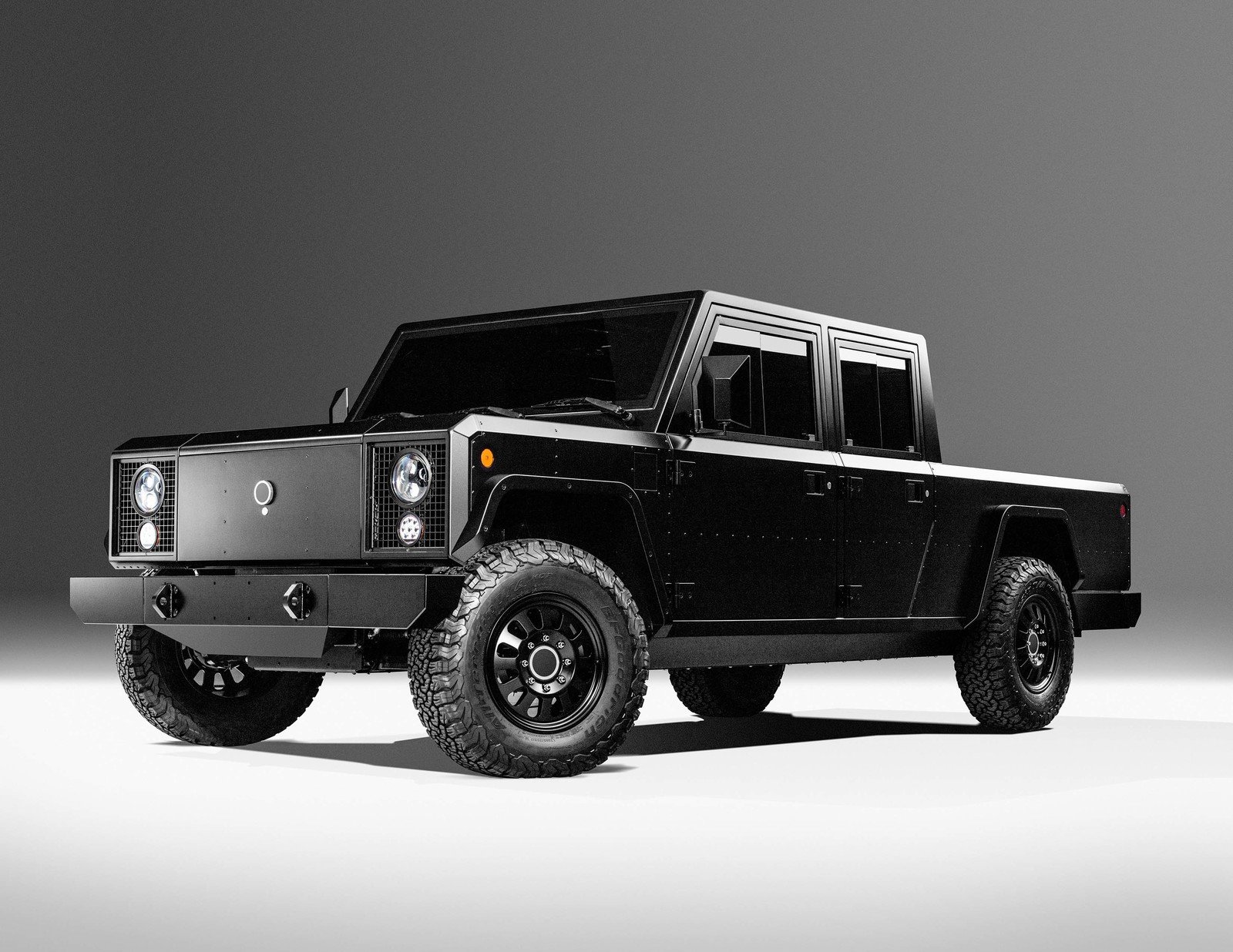 In order to make sure that you have just the right amount of torque, you will be offered with a two-speed Range Gearbox. This feature will help you achieve 60 miles per hour in less than five seconds, 4.3 seconds, to be precise. B2 features a transfer case and a four-wheel-drive configuration.

Besides other things, this Bollinger truck can boast both rear and front locking differentials, rear and front disconnecting sway bars, ventilated 11.75-inch disc brakes, and last but not least, geared axle hubs. Also, B2 features a hydro-pneumatic suspension who is self-leveling, and that has a travel range of ten inches. This feature will allow the owners of this vehicle to drive over the roughest of terrains possible. 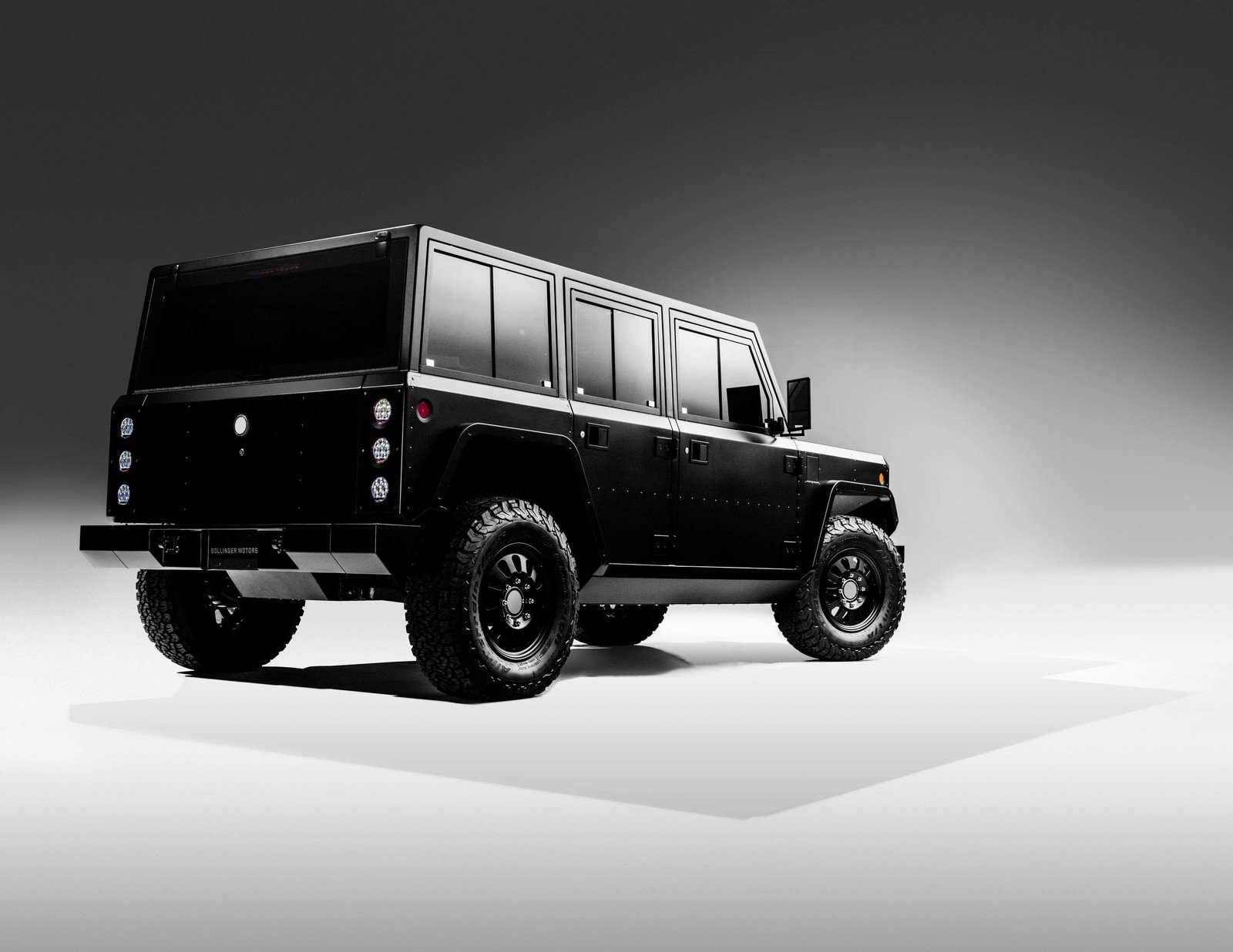 When it comes to the inside of these vehicles, B2 is a real example of that saying, the simpler the better. It features a basic steering wheel and simple analog gauges. As we said earlier in the article, these vehicles don’t eve feature airbags, which is pretty unusual for modern types of vehicles. Manufacturers maybe didn’t do all that was essential at first sight, but Bollinger’s CEO stated that all compiles with the third class of Vehicle security regulations.

It has four windows on all four doors, and all of the windows are opened with a manual sliding with latches. If that is not old-school, we don’t know what is. Plus, this car features a column shifter that you can use for purists. What’s really impressive is that you can find only 6 110-volt outlets overall. The battery located in the truck can be used as an external source, and it’s not limited to powering just drivetrain.

The Release Date and Competition 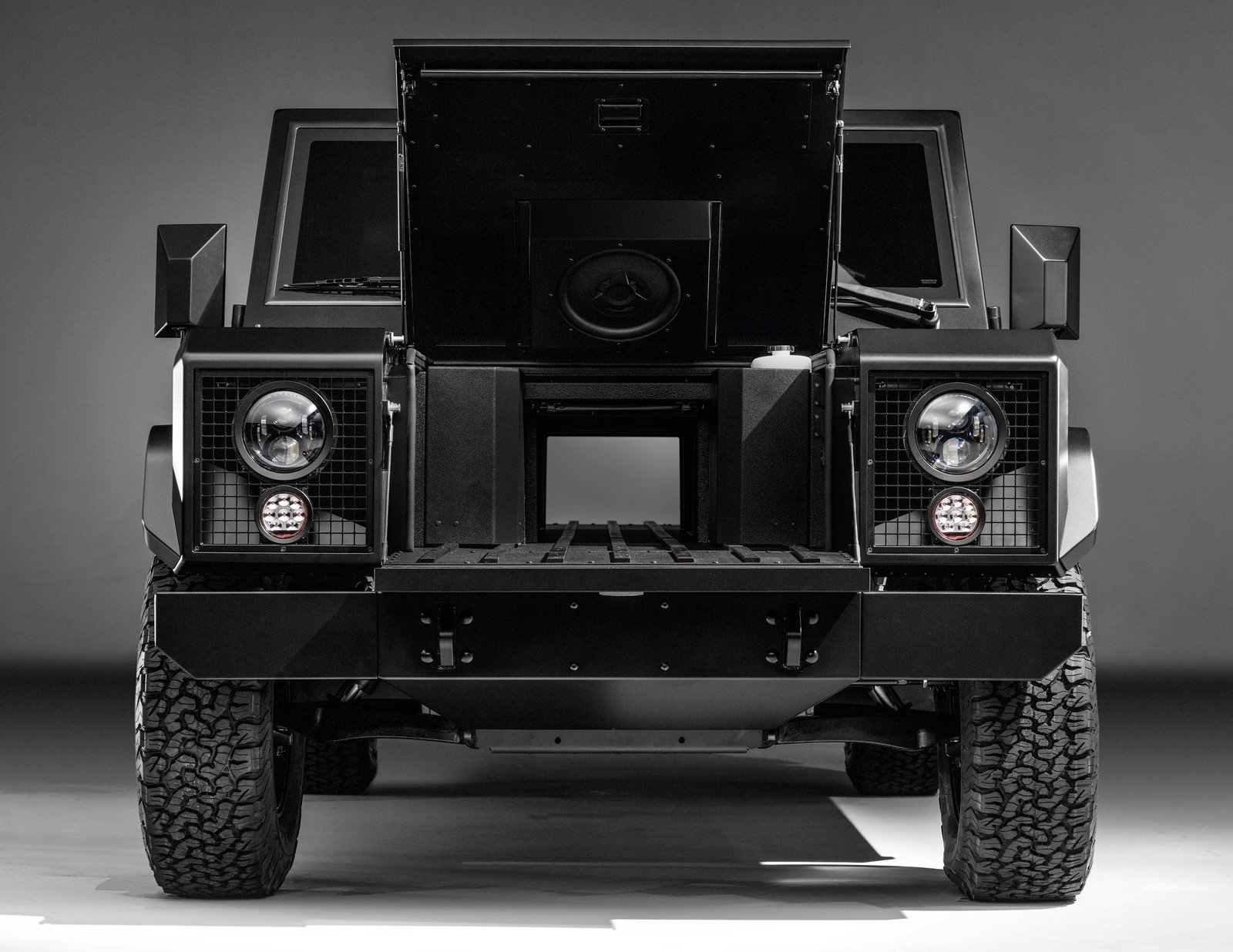 If the company stays true to the release date of these two vehicles to the info that they released, they are going to hit the road in 2022. This will probably create a duopolistic market if they release it before Rivian and Tesla. The latest statistics that came from the company itself says that they already have more than 30,000 potential customers. This is really impressive, right? 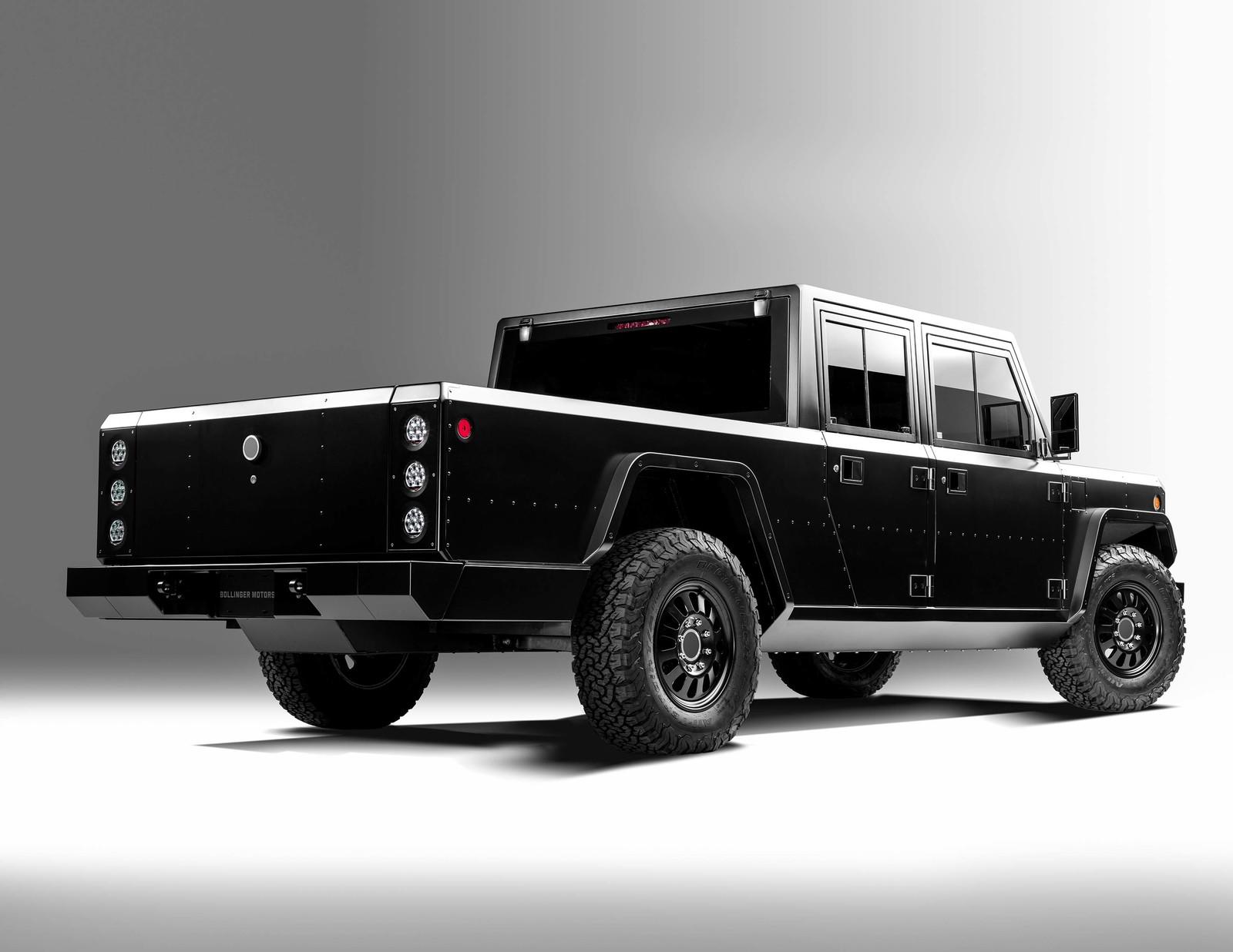 This is a real refreshment to the high-volume vehicles because Bollinger doesn’t throw all their bets on the looks and design. Instead, we will have a really powerful and practical vehicle on the market in one and a half years. Also, they stated that their intention is not to sell more than a million vehicles in one year. They will take their product to the top step by step.