Egyptians have been cruising down the Nile for thousands of years, so it makes sense that a Nile River cruise is one of the best ways to see and explore some of the top attractions and sites that this country has to offer.

Don’t worry though, in this article we’re going to break down the differences in Nile cruises including the top things to look for and consider for when it comes time for you to book your own Egypt tour. Most  travel between Luxor and Aswan, stopping at critical points of interest along the way which are: 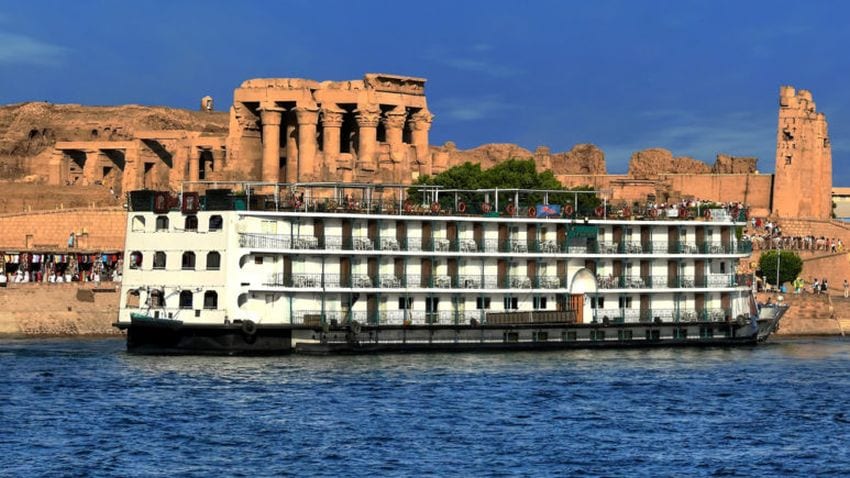 Luxor is home to several of Egypt’s most exciting and inspiring attractions. Here you can find the Valley of Kings, filled with the tombs of ancient Pharaohs of years past. While many of these tombs have been discovered, many remain hidden in these hills. You’ll also see some of the country’s best-known temples: Karnack Temple, Luxor Temple, and the Temple of Queen Hatshepsut.

Additional sites worth noting are the Colossi of Mammon, the Valley of the Queens, and several museums, including the fascinating mummification museum. Luxor is also one of the top places in the world for a hot air balloon ride. See the Nile River and the Valley of the Kings from above as the dawn breaks; it’s a magical experience.

The temple of Edfu, which is dedicated to the god Horus, is one of the top temples to visit in Egypt for one main reason: it’s the best-preserved temple in the country. Edfu temple managed to escape damage from the Nile floods, the carvings and hieroglyphics here have been incredibly helpful to archaeologists and Egyptologists in terms of learning about the temple rituals of ancient Egypt.

The temple of Edfu is the second most significant temple in Egypt (Karnack being the largest) and took over 200 years to build. Some of the most notable attractions within the temple include the Milometer, which was used to measure the height of the Nile to help predict future harvests, the Passage of Victory, which depicts the battle between Horus and Seth, and the Hypostyle Hall where you can find carvings of the ingredients and recipes needed to make different perfumes.

Kom Ombo is just a small stop, but the temple is worth a visit. It’s an interesting temple because it is dedicated to two different ancient Egyptian gods; Horus, the falcon god, and Sobek the crocodile god. Even though it is one temple, it has two of everything: entrances, halls, courts, and sanctuaries.

Another must-see in Kom Ombo is the crocodile museum. Perhaps you saw the human mummies in the museum in Egypt, but here you can see 22 mummies of crocodiles. You’ll even get to see some crocodile coffins- bet you haven’t seen one of those before! 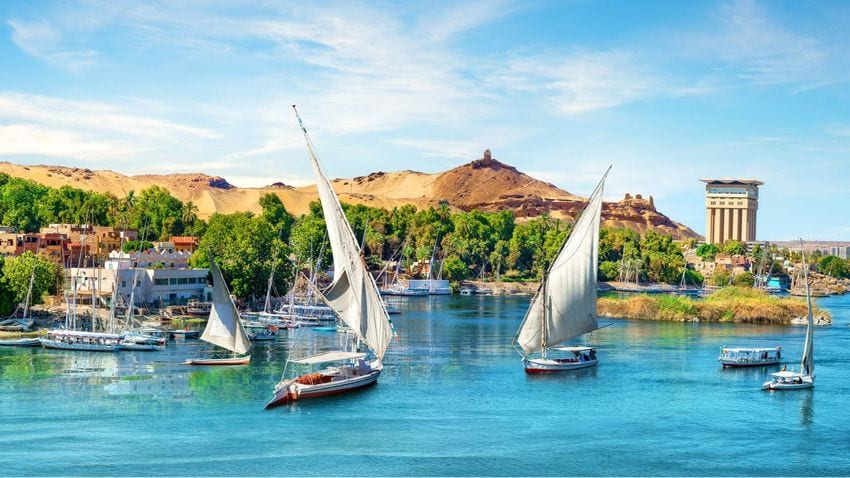 Aswan, in southern Egypt, will likely be the start or endpoint of your Nile cruise, depending on which direction you choose to go. Aswan doesn’t have the massive temples that Luxor does, but it still has plenty to see and do, including the Nubian village, the spice market, and the beautiful botanical gardens.

From Aswan, you can also see the famous High Dam along the temple of Philae, which is dedicated to Horus and Elephantine Island, which has plenty of interesting ancient artifacts. Aswan is also the gateway for one of Egypt’s most vital and important ancient attractions: Abu Simbel. Those who want to see this incredible site can take a short flight from Aswan or a three-hour car journey.

Don’t forget, one of the big reasons why a Nile cruise is such a great way to see Egypt is because of the scenic cruising. As you pass through the cities listed above, you’ll be able to see some of the monuments and attractions all lit up in the dark. While, during the day, you’ll pass beautiful Nile vistas where you can see local Egyptian communities and gorgeous landscapes.

It is also possible to do a more extended Nile cruise that starts in Cairo and ends in Aswan. However, these are not as popular due to how long they are. Most people prefer the Luxor-Aswan route as it can be done in less than a week, allowing you to spend the rest of your Egypt vacation exploring other parts of the country. That being said, it is an option if you would like to do a 2-week cruise.

How Long Do You Want to Cruise for? 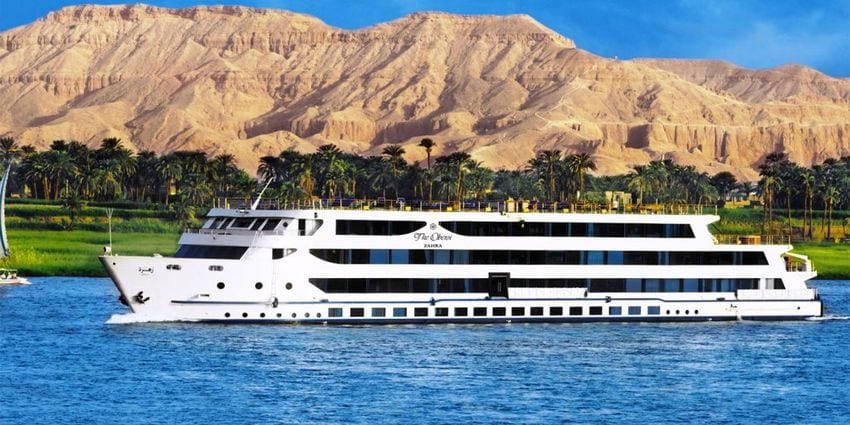 One of the first things you will want to determine is how long you want to cruise for. Do you only have a couple of days? Or do you have a week? Cruises vary in length, even though they go along the same route. Some journeys are as short as 4 days, 3 nights but to get the best experience it is recommended that you do at least 5 days and 4 nights. This will give a much better Nile cruise experience and won’t feel as rushed with your private Egyptologist guide.

On the other hand, depending on the type of traveler you are, you may want to make sure you don’t cruise for too long. While Nile cruises are a fantastic and relaxing way to sight-see in Egypt, some people can find them restricting. In this case, you probably won’t want to book a cruise that is one week or longer.

Where Do You Want to Start your Nile Cruise?

Nile cruises start in one of two destinations: Aswan or Luxor. There is no difference between the cruises depending on the start place; you will stop at the same sights and attractions along the way, however, there are a couple of things worth taking into consideration. When it comes to things to do in Luxor, a lot of people want to do a hot air balloon ride over the Nile and the Valley of Kings. 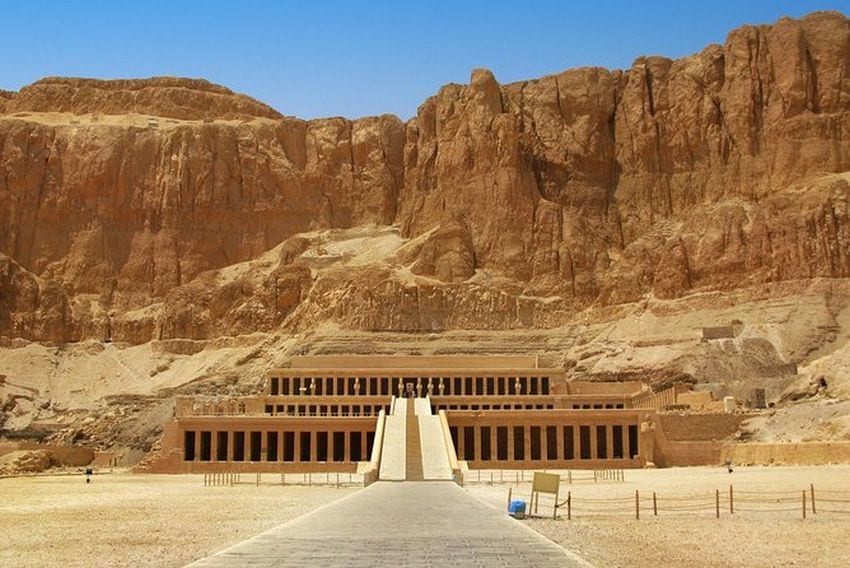 If this is on your list of things to do, you’ll have to plan your cruise around this activity. Since the hot air balloon rides happen at sunrise, you will usually have enough time to do the balloon ride before your journey starts. That being said, it is a very early morning start, so you may not want to jump from the balloon ride right into sight-seeing which will be the case if you plan for both on the same day.

Alternatively, in Aswan, many people choose to make an early morning trip to Abu Simbel temple in southern Egypt, which can be reached by either car or plane. Again, this is a first-morning activity that can generally be timed to fit with the cruise, but that is something you will want to check with your tour provider. Other considerations are; what direction are you going in, and what day of the week are you leaving on? If you are exploring the country with Egypt tailor-made tours, then they will have this discussion with you and plan your Nile cruise accordingly.