The Arabic language is double-sided; difficult and easy at the same time, which makes the process of learning it balanced. So, let’s find it out, is learning Arabic difficult?
Once we start learning the language, we do not only ask ourselves the common question “Is it difficult?”, but most of us think carefully about it, and then search for both difficult and easy topics and grammars to cover the entire language.

Raising the issue of the difficulty of the Arabic language is useless if it is not accompanied by experts’ guidance and solutions, and the necessity of providing educational resources.

Which truly contributes to teaching the language as it should, and in a way that achieves the goals of communication with others, using appropriate expression and conveying meaning.

On television you must have watched journalists, reporters, diplomats, broadcasters, or experts, speaking Arabic with an eye-catching fluency. Or perhaps you have met expatriates or enthusiastic students, who live in an Arab country, and who speak the dialect remarkably. So, is it difficult and complicated, as many assert?

It is undeniable that there are some difficulties, but these difficulties are faced by all of us while learning any language. Especially regarding phonics, pronunciation, grammar, and memorizing new vocabulary. But by choosing the right platform, you open the right door for your child to learn the Arabic language.

There are many websites and online platforms in the digital world, so how do you differentiate between the useful one and not? And where do you start?

We can confidently say that eArabic is one of the most important and unique online platforms in teaching children the Arabic language, using the latest useful and entertaining methods and techniques.

Is Arabic really the hardest language? 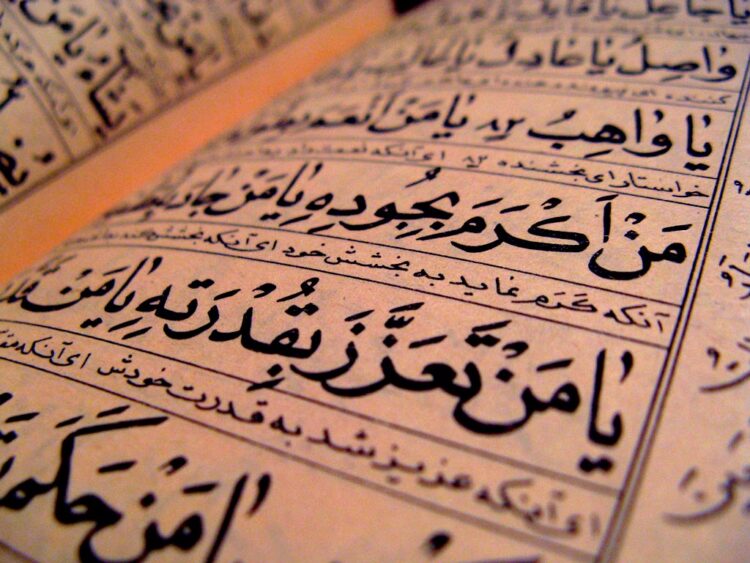 There are many articles, texts and opinions that talk about the difficulty of the Arabic language, and classify it among the most difficult languages, along with Japanese, Chinese and Korean. Whilst easy languages ​​include English, Spanish, Portuguese, French, Italian, Romanian, Dutch and Norwegian.

Even some of those who had the experience of learning Arabic considered it as a very difficult and complex language! On the other hand, you will find those who have mastered the Arabic language are non-Arabs, so where is the truth?

What is already certain is that the difficulty of learning Arabic is relative. Taking it into consideration, there are some factors that relate to how similar or different they are with the student’s mother tongue.

For example, a Turkish or Iranian student may find it easier to learn Arabic than an English, Russian or Chinese student. This is due to the large number of common words between Arabic, Turkish and Iranian language.

The US Department of State has indicated that learning Arabic takes about 88 weeks of study, for a student to master the Arabic language. At the same rate it takes to learn Chinese, Japanese and Korean.

On the other hand, the Arabic language is one of the most prevalent languages ​​in the world, spoken by about 450 million people, including Muslims, Christians, Arabs, and non-Arabs. We can affirm that learning the Arabic language may not be easy, but at the same time it is not difficult or impossible, as many believe.

Why is it difficult to learn Arabic? 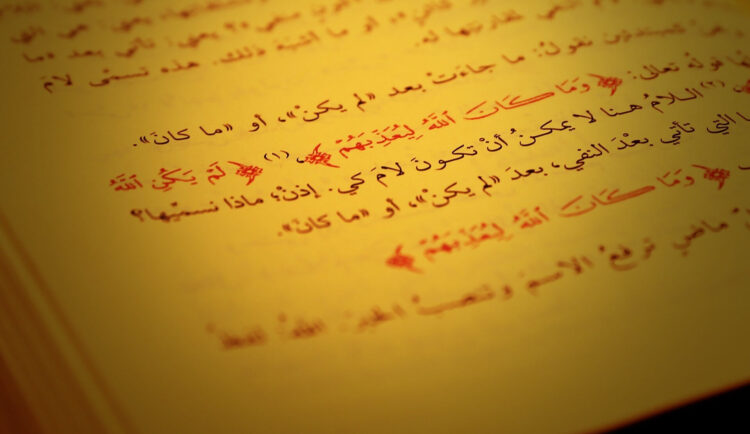 Each of us faces difficulties either in learning a profession, a hobby, a subject, or a language. Difficulties and obstacles always existed, but with perseverance and patience, skills can be acquired.

It is true that many specialists unanimously endorse that there are difficulties in learning the Arabic language, but at the same time, they agree that these obstacles can be overcome by resorting to the right educational resources, and by using contemporary techniques and methods.

The difficulties that the student may face are:

Non-Arabic speakers may find some difficulties in pronouncing some letters in the Arabic language, but they do not exist in other languages, such as:

These letters need continuous training so that the speaker can master them and convey the correct meaning to the recipient.

In addition, there are some short vowels such as (fat·ḥah ــَـ‎, dammah ــُـ ‎ and kasrah ــِـ ), and long vowels such as (ʾalif ا – wāw و – yāʾ ي). As for writing the hamza, the Arabs make mistakes themselves.

Modern Standard Arabic is used in official, diplomatic, media, educational, literary, and scientific forums, and congresses. It is not used in daily life. People speak to each other with dialect. Dialects vary according to Arab countries, and there are many dialects in each country. So, which language will you learn, and which dialect will you choose?

Why is Arabic easier than you think? Well, it’s time to dispel some illusions about the difficulty of learning the Arabic language. The Arabic alphabet consists of 28 letters, but each letter has only 5 basic forms, and it is written clockwise.

As for the sounds and the pronunciation of letters, most of the sounds in the Arabic language exist in the English language too. The different letters can be learned with continuous training.

The Arabic language consists of a rich and enormous vocabulary. For example, the camel has 400 names, and the lion has 200 names in the Arabic language. Whilst love has many synonyms, but in daily life, in dialect, this amount of vocabulary is not used.

Like any other language, it suffices with what is necessary, clear, and direct. One of the wonderful things about learning the Arabic language is that all its vocabulary is easy and using suffixes and prefixes to the words is the same as the English language.

For example: the verb ‘write’, we can add another two letters (suffix – er) to it and become ‘writer’ or use it as an infinitive ‘written’.
As for the tenses in the Arabic language, it consists of the past and present tenses. The future tense is often referred to as a prefix added to the present tense.

The conjugation of verbs in the Arabic language differs with masculine, feminine, singular, dual, and plural, but once you memorize one grammar table, it will be easier for you to apply the grammar with the rest of the verbs and use it correctly.

What should every new learner of Arabic know? 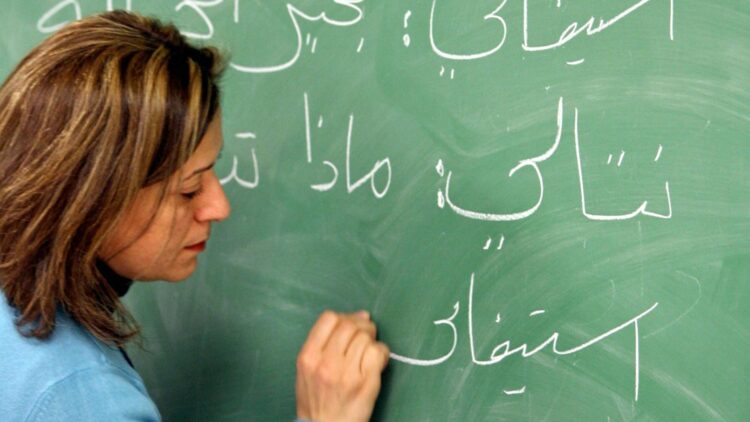 An important issue must be clarified for every person willing or eager to teach his child the Arabic language. It is the issue of bilingualism in Arabic, which has been mentioned before. Is it necessary to learn Modern Standard Arabic or the colloquial language?

The answer to these questions differs due to our different goals of learning the Arabic language. Do we need Arabic language only for chatting? Or to learn to read and write? Or to engage in dialogues and discussions in the media or diplomatic meetings and conferences?

Modern Standard Arabic is not used in daily life in Arabic-speaking countries. It is the language of audio-visual media, newspapers, books, literature, and correspondence.
While people speak to each other in a colloquial dialect that is almost devoid of grammar and its complexities and is characterized by brevity. Arabic dialects dwindle and diverge from the Persian Gulf to northwest Africa.

The problem with learning a spoken dialect or slang is the lack of good, comprehensive resources for learning spoken dialects. Unlike Modern Standard Arabic resources, high quality media and platforms are available, accessible, and easy to use.

How do you start learning Arabic?

Memorize the letters and pronounce them correctly. It is the right start to learn any language, not just the Arabic language. It is necessary to follow the child, listen to him, and train him to pronounce the letters until he masters them, with continuous encouragement and support.

Also, one of the ways to start learning Arabic is to write different lists. For example, a list of the most important common verbs, or a list that includes common vocabulary in daily life.
And another one includes the necessary dialogues with others. But the most important step in learning Arabic is choosing the right electronic platform. In addition, it is possible to resort to means that are entertaining and useful at the same time to develop the Arabic language, such as watching children’s TV shows, movies or fun dubbed series for children, and listening to children’s songs.

Head over to their website now and book your first lesson to start your child’s learning journey with the professor of your choice. What are you waiting for?