The city of hippies, but also of hi-tech giants, knows as much as anyone how to regenerate from its ashes and entice the traveller to its foggy charm. There are thousands of reasons to visit San Francisco. Let’s discover together the most important reasons to visit it: 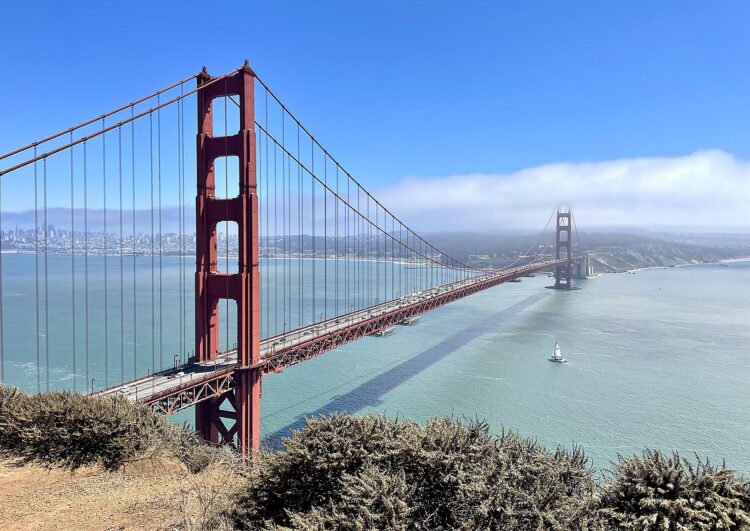 A trademark of the city, the 2.7-kilometre Art Deco-style suspension bridge connects San Francisco with Marin County. It was completed in 1937 by Joseph Strauss and has been described as one of the Wonders of the Modern World. It took four years to build, more than $ 35 million and 130,000 kilometres of cables! Its characteristic orange colour, “international orange”, as they call it, was initially chosen at random. The aim was to protect the metal from the salt of the sea with the appropriate material. Soon, however, it seemed to serve elsewhere, as it helped to make the bridge visible on days with a lot of fog. It is worth crossing it on foot. You will feel closer to discovering yourself or starring in a noir novel.

This is where “Summer of Love” started with thousands of hippies protesting peacefully and rock giants such as Grateful Dead and Jefferson Airplane giving their best live performances. It is the third most visited park in the USA; in its place, until 1886 there were only dunes and bushes. Now, at 4.1 square kilometres, nature sets up its craziest dance. Here you will find, among others, ten lakes, a waterfall, windmills and tulips, wild orchids, age-old trees and an aquarium with more than 38,000 sea creatures from around the world. Preferably visit it on Sunday, where every day for many years from 11:00 to 14:00 Lindy in the Park is organized, i.e. free swing lessons, which is an excellent opportunity to dance and meet the locals. 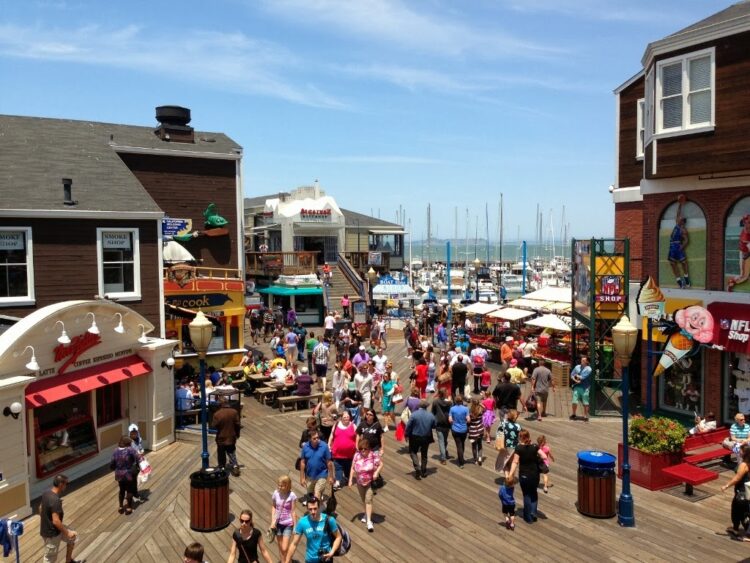 There is a creative commotion every day at the Fisherman dock. Fishermen talk to each other about fish, local bands set up live outdoors, sea lions sunbathe lazily at pier 39. In the latter, you will find many souvenir shops and restaurants. Make a stop at the historic Boudin bakery, watch from the huge window the staff bake the most delicious, chewy bread you have ever tasted, grab a sandwich and continue your walk. From the pier, you will gaze at the Golden Gate Bridge and of course, the clear blue waters of San Francisco Bay. Even if you did not plan to visit this busy place at some point, the road would definitely lead you here, as Fisherman’s Wharf is a starting point for many walks: from an excursion to Alcatraz Island to an ascent to one of the hills in the hills of San Francisco.

The truth is that they are still a tourist attraction. On the other hand, it is difficult to resist their charm. Boarding these vehicles – the only ones that have been declared as protected monuments – is like entering a time capsule. They appeared on the streets of San Francisco in 1873, offering great relief to the locals, who until then had climbed the many hills of the city with panting. Today you can choose between the three lines. We recommend Powell-Hyde starting at Powell Market, stopping at Nob and Russian Hill and disembarking very close to Fisherman Pier. 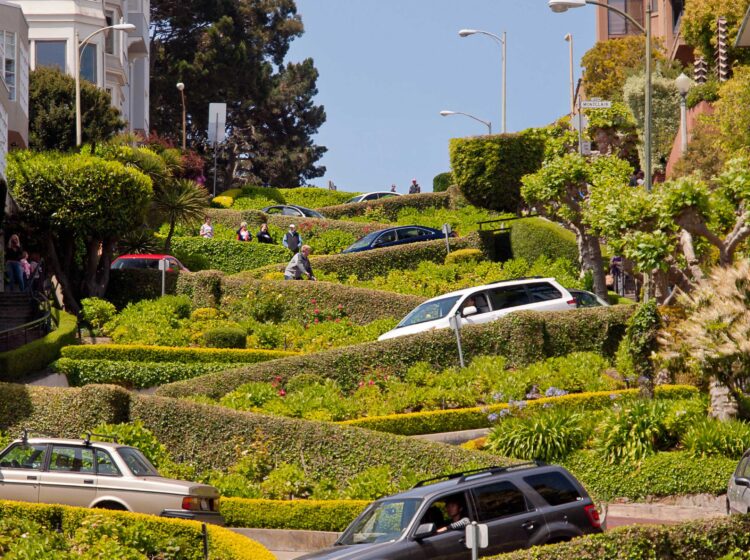 Can a road (literally) be an attraction? And yet, the answer is yes. This is evidenced by the famous Lombard Street, an eight-turn downhill road that looks like a flowery maze. Make a stop at number 900. Maybe the house reminds you of something. It is the home of Scottie (James Stewart) in Hitchcock’s Vertigo.

Its name in Spanish means seabird, but on the Rock, as Alcatraz is otherwise called, no one was free, as it housed the high-security federal prisons with the most notorious criminals, including Al Capone. Probably no one managed to escape from this small islet at the Gulf of San Francisco entrance. The prison operated from 1868 until 1963. It is now another piece of American history. There are daily morning – and for the unshaken – evening itineraries from Fishermans Wharf to the Rock. The tour includes, among other things, a tour of the detention centre and the courtyard, as well as an audio document with interviews of former detainees. 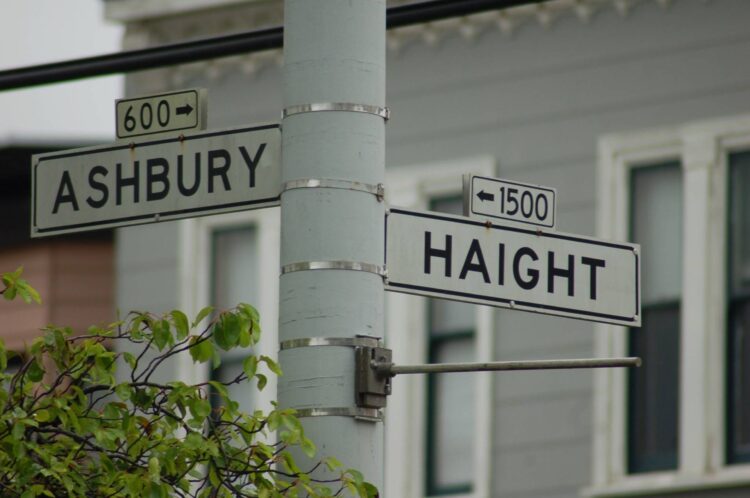 From this neighbourhood with the magnificent Victorian houses, the Flower Children began their activities, dancing in the streets, shouting anti-Vietnam War slogans and dreaming of a better world. Today, few things are reminiscent of that period, as the former convent has given way to hip restaurants and cafes. However, if you want to get a little taste of the past make a stop at Amoeba. These are the few record stores with rare music from the late ’60s. Also, visit Piedmont Boutique to browse the massive collection of eccentric costumes and stand outside the house at 635 Ashbury Street, where Janis Joplin stayed.

Otherwise the “Mecca” of good food. It is located at the port on Market Street. It first opened its doors in 1898 and housed the most interesting gastronomic scene of the city. Visit the Humphry Slocombe for ice cream with walnuts and maple and make a short stop for coffee and Belgian waffles at Blue Bottle. If you choose to dine here, the options are many and delicious. Boulettes Larder stands out for its snacks and Gott’s Roadside for its juicy burgers. Be sure to visit the Ferry Building on Farmers Market Days. Here you will find the best local products and the most prominent chefs of the area to choose the raw materials for their award-winning menus carefully.

San Francisco is known for its steep slopes and stunning scenery. It is a real pleasure to drive in this city and to “get lost” in its vast streets. To move easily and safely, it is recommended that you own a vehicle, which will ensure your immediate movement at any time during your stay. This way, you will have the opportunity to visit and experience the above experiences described to you, while at the same time saving a significant amount of your travels. So you can turn to the rental company Enjoy Travel which has branches all over America and specifically in the city of San Francisco, where it can offer you modern vehicles at the most advantageous market prices.