“A well thought out critique of whatever you’re doing is as valuable as gold.”

The above words were told by Tesla’s founder, Elon Musk himself and for a guy who likes to be critiqued, constructively, let’s get down to business.

Anything that we say about the Cybertruck will fall short now. Apart from a handful of spec details and a video that shows the EV truck beating the crap out of an F-150, everything about the Cyber truck is worth ogling. The dedication and the capital that went on to brand the Cyber truck as the next exclusive Tesla in the market is like a Hollywood tale.

Firstly, the design. The Cybertruck in entirety has a very unconventional look. The triangular design with sharp lines can be categorized as a futuristic look but not like those orthodox future cars. You know, the ones with 360 degrees rotating wheels or with wingspans, etc. At first glance, the rigid chassis and the raised suspension give out the impression of a sturdy truck, but the exoskeleton makes all the difference, it seems as if a second standard student drew that as part of his school project. 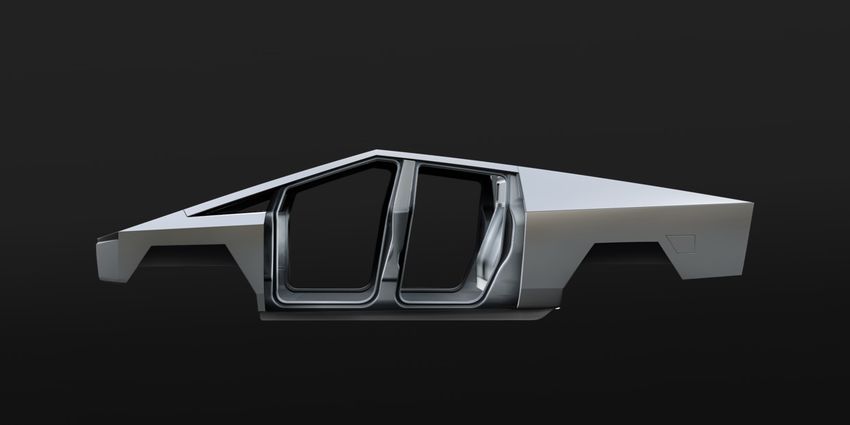 But the exoskeleton is not without any sophistication as well. Tesla has claimed that the exterior shell is so durable and rigid that it is literally impenetrable. This claim was put to test when the Cyber truck was unveiled and boy, they were right! In a demonstration, they tried to smash the ultra-hard 30X Cold-Rolled stainless with a sledgehammer, the door did not even have a dent.

Was probably obsessing over a zombie apocalypse movie, so much, that having armored glass was deemed fit for the Cybertruck. The EV’s ultra-strong glass and polymer- layered composite can absorb and redirect force, thereby improving performance and damage control. Though the demonstration for this failed miserably when the glasses broke and as Elon Musk puts it, “Failure is an option here. If things are not failing, you are not innovating enough.” So, no need to worry, the Cyber truck that will get delivered to your house will be as reliable as Superman.

The interior is also filled with tons of novel elements, that till now has not been seen in any Class-2B truck, as well. Firstly, the minimalist approach that Tesla has given to the Cyber trucks interior, accentuates elements that you would seldom notice if it was refurbished like a Bentley. 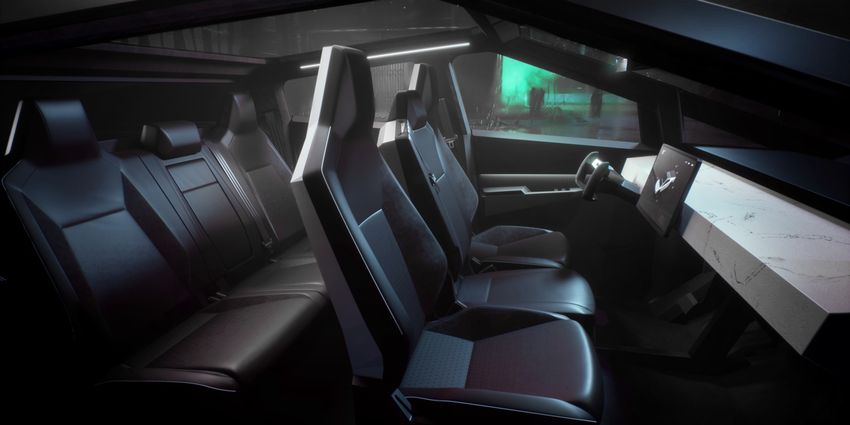 The 17-inch touch screen lights up with a lively graphic of the Cybertruck from all angles. The squared-off steering wheel gives a racy vibe, every time you’re on the driver’s seat.

But, you can never really come to a conclusion as far as the design is concerned. You put the other Tesla models, the Model X, Y, S, 3 and the yet-to-launch, Roadster, they have a pretty monotonous design aesthetics. All of those cars stick to the design structure of the type of car they each represent, which are saloons and sedans. When it comes to the Cyber truck, it does not look like a truck from any angle. I can’t emphasize this point enough, but it looks like a school project more than an automobile project. You could read more on Cardingo.com if you’re interested. 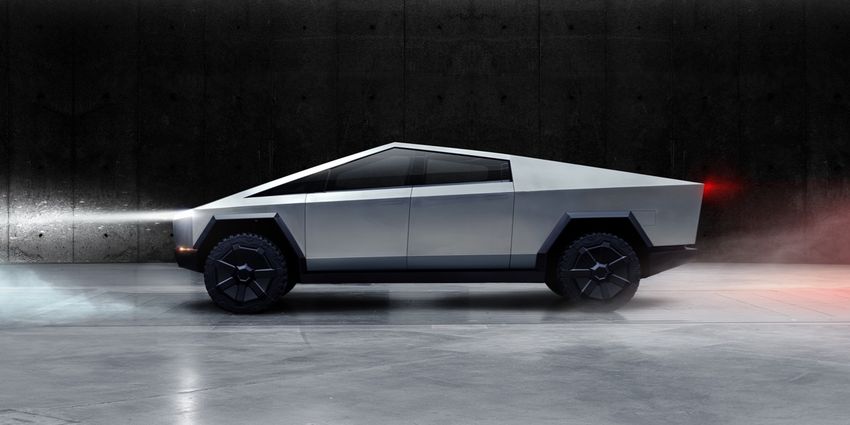 This is where Cybertruck’s marketing point lies. Right from the font style of the Cybertruck to the design of the webpage, where you can order the Cybertruck, every nook, and corner, has been carefully supervised and executed in a manner to make it look as exclusive as it should feel.

Quick fun fact, did you know that Elon Musk has copyrighted the typography of the Cybertruck. Now, Musk, a self-confessed obsessions of pop-culture, loves video games, movies and everything that is popular. The announcement of both the Cybertruck and the futuristic game Cyberpunk 2077, coincided around the same time. If rumors are to be believed then the Cybertruck might feature in the game and given Musk’s obsession for video games, we may very soon be able to play the game inside the truck too.

Talking about the future, though the exact power outputs were not revealed, Tesla did disclose some numbers. The tri-motor AWD model has a range of more than 500 miles, can hit sixty miles per hour under 2.9 seconds and a quarter-mile can be done in just 10.8 seconds. Therefore, the Cyber truck in one word can be said – Quick.

The above numbers are not ultimate. Tesla is yet to reveal it’s Plaid power train. Back in 2017, Tesla unveiled its joker card with the Roadster. The Plaid mode is above Ludicrous mode and it promises that it can sprint from 0-60 mph in 1.9 seconds. 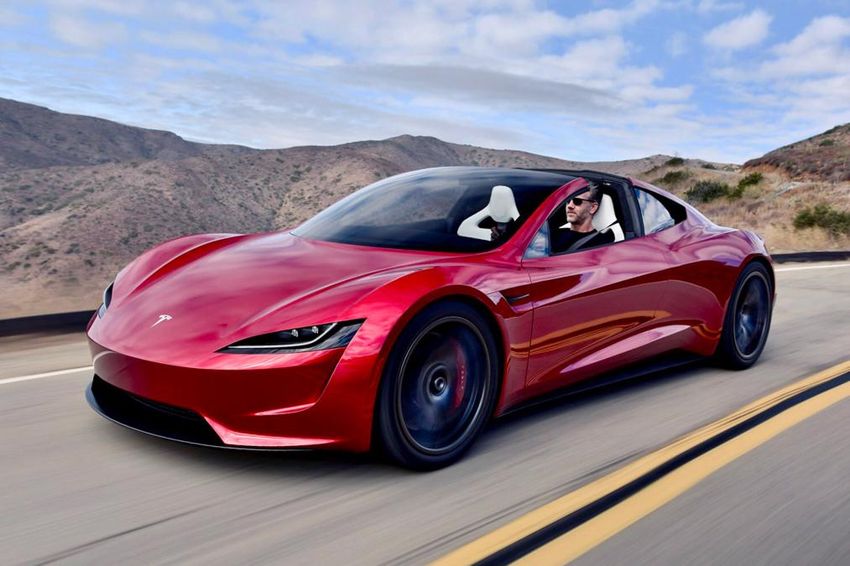 Also, Tesla has been hitting the Nurburgring quite a few times these past months, taking a modified Model S with the Plaid Power train. Provided the Cyber truck will be out for delivery around the same time as the Roadster, we can assume that the Plaid mode will be available then.

However, the numbers for the Cyber truck does not stop here. With a 6.5-ft pickup bed, the EV has a cargo capacity of 3,500-pounds plus it can tow 14,000 pounds. But the best part about the new Tesla will be its automation technology. Recently, the California-based company released a new video of what Autopilot neural net can see as well as new images of other systems that are powering the Autopilot, including a simulator with the Cyber truck in it. If everything goes as planned, then 2022 is going to be the year that will see Tesla release its full-driving system built on Autopilot. 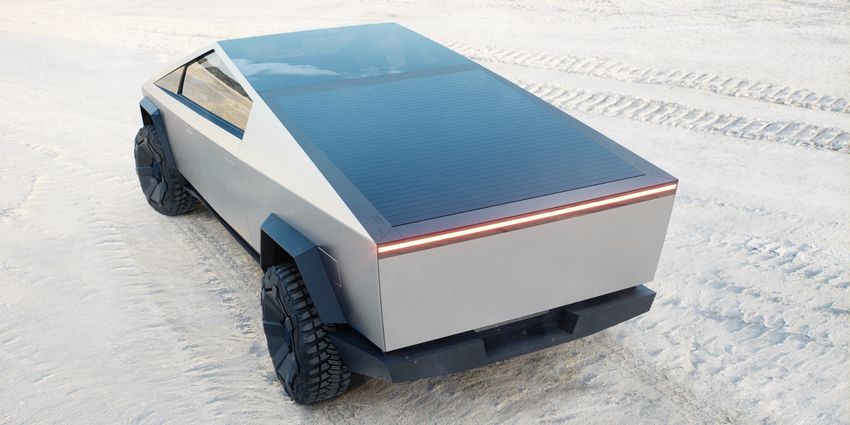 If you are still not convinced with the above description, then let us also tell you that the new Cyber truck might see lasers beams instead of a normal wiper. A report was recently published by the United States Patent and Trademark Office, wherein it suggested the usage of laser -beams to keep the car window clean. The document further states how Tesla will fit sensors around the vehicle to detect dirt and grime on the windshield, as well as for the side and back windows. 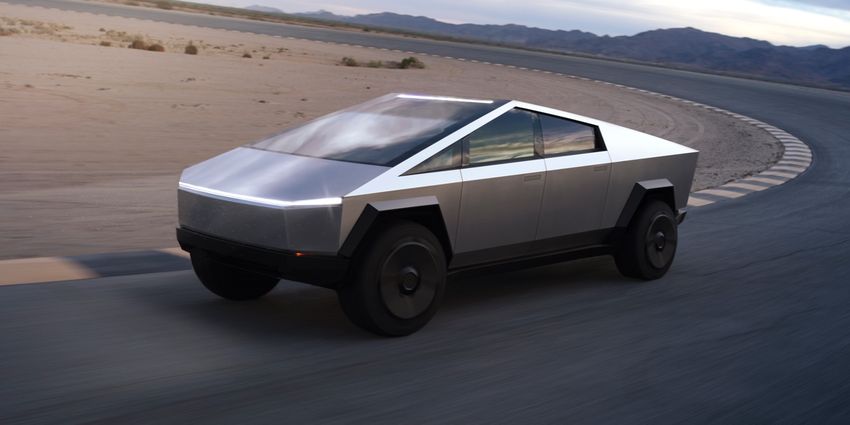 Last but not the least, you can book a Tesla Cybertruck by depositing just $100. It doesn’t matter which variant you’re buying. The Tesla comes with three engine options, a single motor rear-wheel drive, a double-motor all-wheel drive and tri-motored all-wheel-drive variant. If you put an additional $7,000 then you can get Tesla’s revolutionary full self-driving kit.

It is because the Cybertruck is priced so reasonably, the number of bookings is staggering and Musk has already confessed it might take three years to deliver the current bookings. Provided that the Cyber truck will go on roads in 2022, the wait will be a bit difficult.