Are you building a new custom PC for your office or gaming room? Do you perhaps need an upgrade to your existing configuration in the form of a new graphics card? Whatever the case, this article will help you look for the best one that costs under 10000. A graphics card is one of the most important components in a computer. 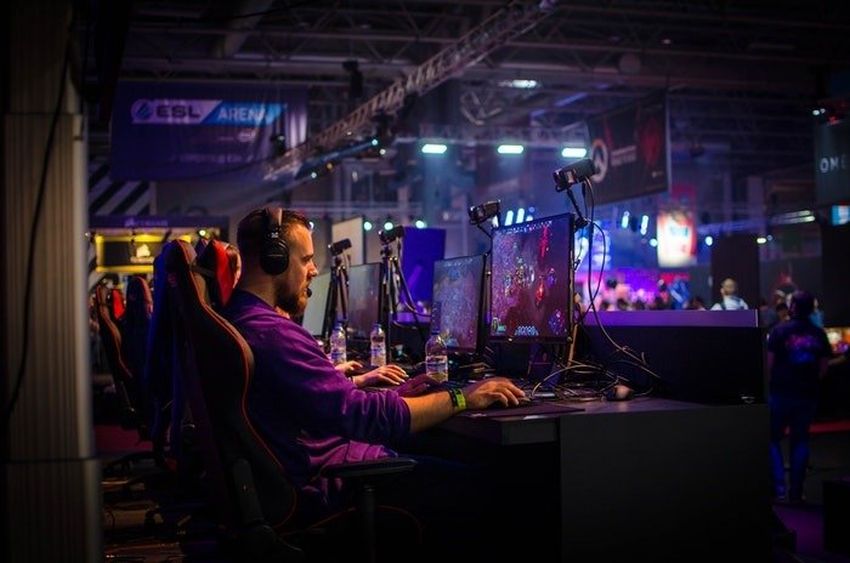 It is in charge of delivering the visuals onto your display, and the better the card, the more details and HD features you can run on your machine. Therefore, you should approach a new graphics card purchase with a lot of planning and never be hasty with it. Enjoy the following list of awesome graphics cards!

The first one we have here is also the most powerful. At a first look, it seems it costs well above the 10k mark we have set already. This very well may be the case, but if you devote some time and find a good deal, you can get it for much less. What is more, this is a graphics card that can easily compete and go head to head with the cards from a higher price range and tier level. Let us see some of the best features it offers. 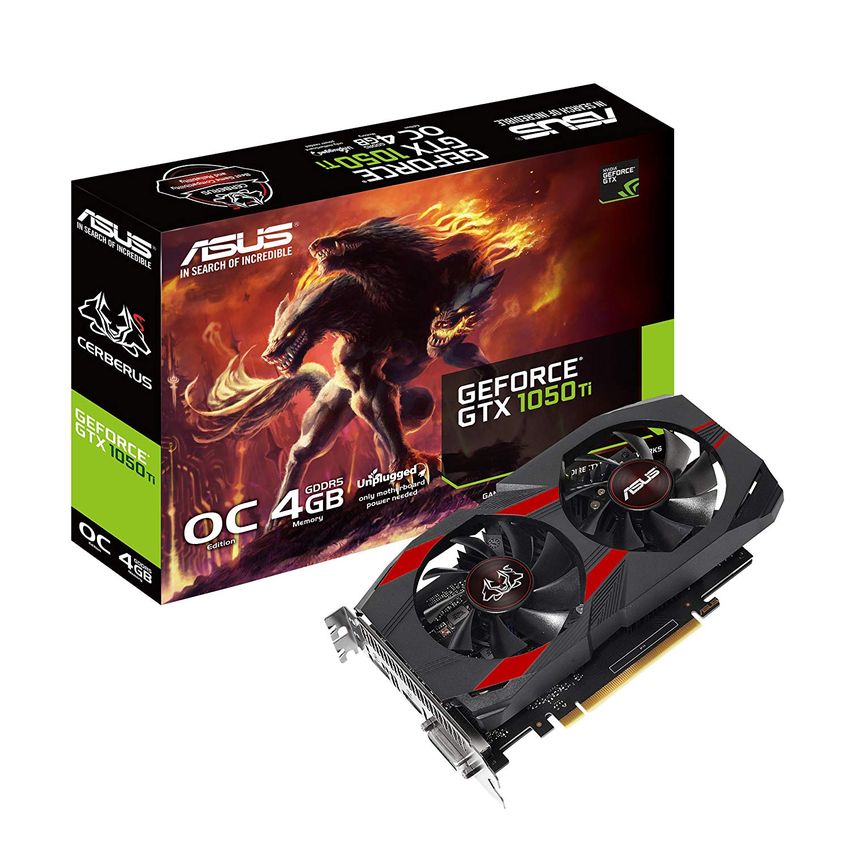 First of all, the 4 GB of DDR5 video memory is more than enough for playing the most popular and fastest online games, including Fortnite, PUBG, and Minecraft. Furthermore, the 128-bit memory bus can read two 64-bit chips at the same time, which means you will get a far better performance than most of the cards in this range.

Moving on, this quality GPU from GeForce is equipped with the 768 CUDA cores that will ensure sharp images which helps a lot while you are playing fast and action packed games. This features eliminates and lowers the time lag, essential for making split second decisions. Regarding the clock speed, this GPU does an impressive job and it ensures quick loading of frames, and not frame drops. 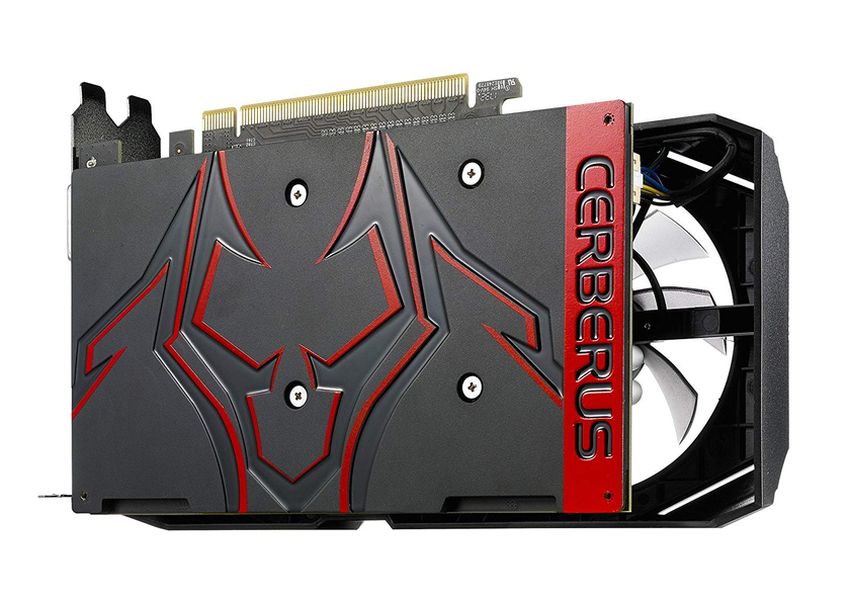 This GPU has three display ports, one Port 1.4, one HDMI 2.0b, and one DL-DVI. Regarding the power, it consumes about 75 watts, while the recommended power supply for the optimal performance and functioning of the card is 300 watts. Last but not least, the cooling features. This card has dual fans, so you should not worry about it overheating while you enjoy your games during longer sessions.

The second graphics card is by a famous brand collaboration, between Gigabyte and Radeon. The RX 550 D5 GPU is equipped with 2 GB of VRAM, and it is a powerful graphics card that will allow you to play most of the newer games. The prices sometimes exceed 11k, but through some discounts and by shopping around and browsing, you can find a great price. 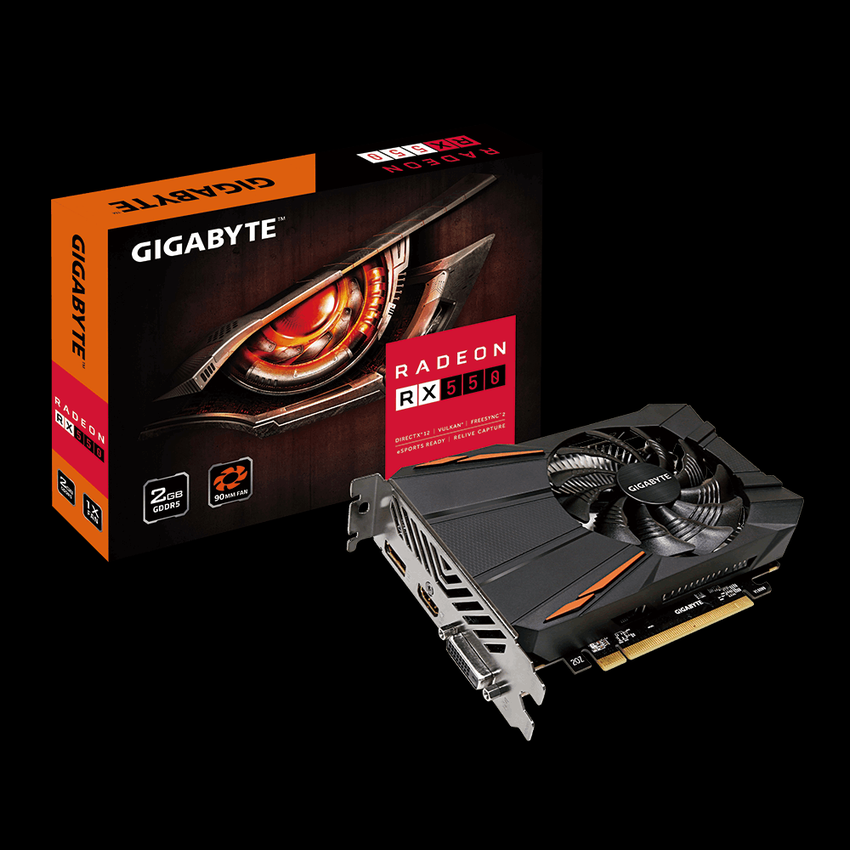 It should be mentioned that this is a slower and less powerful component than the one above it, but it is swill a quality graphics card with a clock speed of 1183 MHz. The speed it has ensures no time lag while loading the frames of the games and other video material.

Next, we should mention that the ATX form factor means that the card is compatible with all of the latest motherboard configurations, which will result in enhanced gaming performance whatever motherboard and processor you have. Physically, this is a somewhat smaller graphics card when compared to the competition, so it only has one fan for cooling, which is enough. 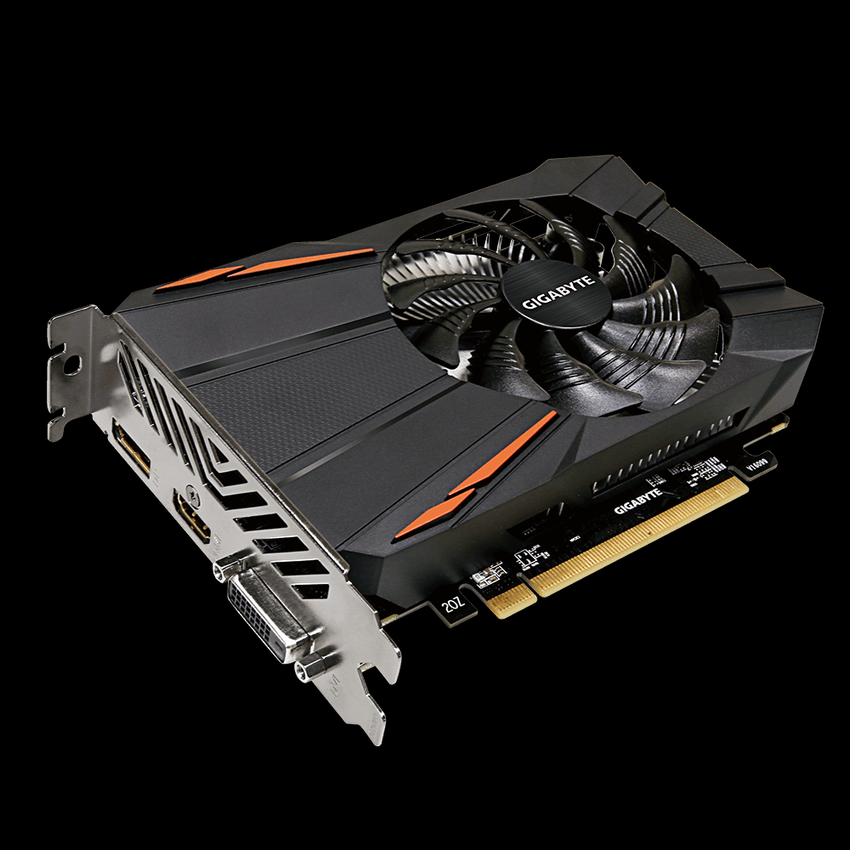 Of course, it supports HDMI connected 4K resolution @ 60Hz, enough for playing most of the currently popular games. In addition, DP 8K is also supported at the same frequency.
Since the configuration is just slightly above average, so is the cost, meaning this is a great entry level budget graphics card. 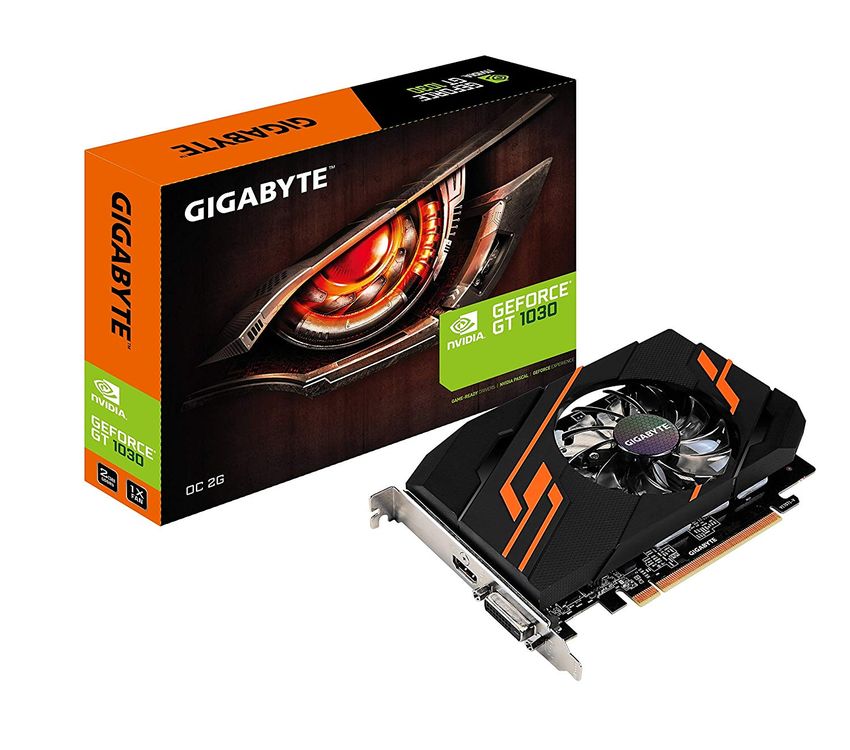 The second Gigabyte card on the list will also be the last we discuss. This time, they worked with GeForce to produce the GT 1030 GV card with 2 GB of memory. Gigabyte GeForce graphics cards are generally considered among the best on the market. However, there are big gaps between some of them, since they belong to different price ranges and performance levels. Since we already discussed the GTX 1050 Ti earlier, we should say straight on that the GT 1030 is much less powerful. Still, it is a good budget card for less than 10k, and it will give you a lot of gaming fun.

Thanks to the good clock speed and 2 GB of memory, gamers can run the popular games at medium settings. The custom fan is there to reduce the noise and cool down the card during gaming sessions and provide the necessary flow of air. Also, the AORUS graphics engine enables gives you the ability to access the overclocking with a single click, and increase the features for more demanding gams. Lastly, the card has a Low Profile factor. Although it is not as effective as the ATC Form factor, the GPU is still compatible with most motherboards. 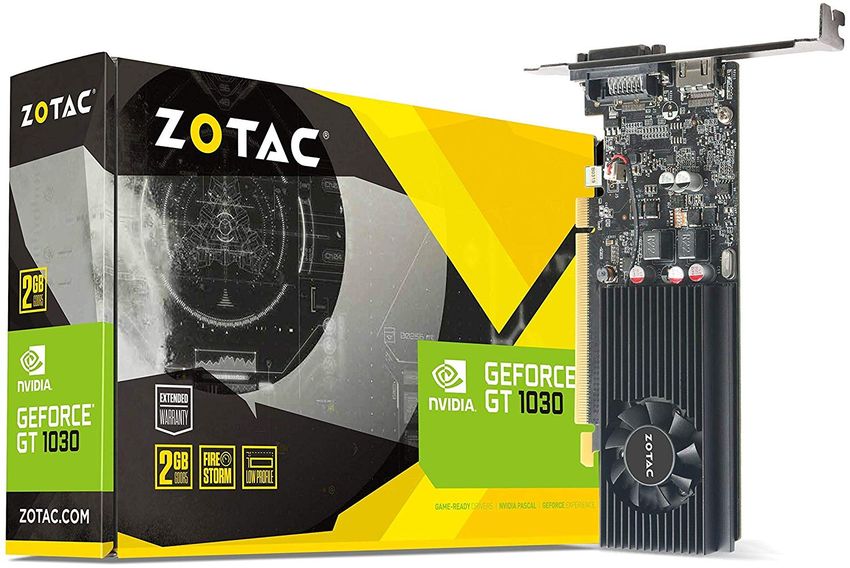 The next GPU is quite similar to the number one entry on the list, as well as the third one. Of course, it is much less powerful and will have some trouble running the latest games on the highest settings and resolutions. This makes it good for the less serious gamers who play their games occasionally and with less expectations. 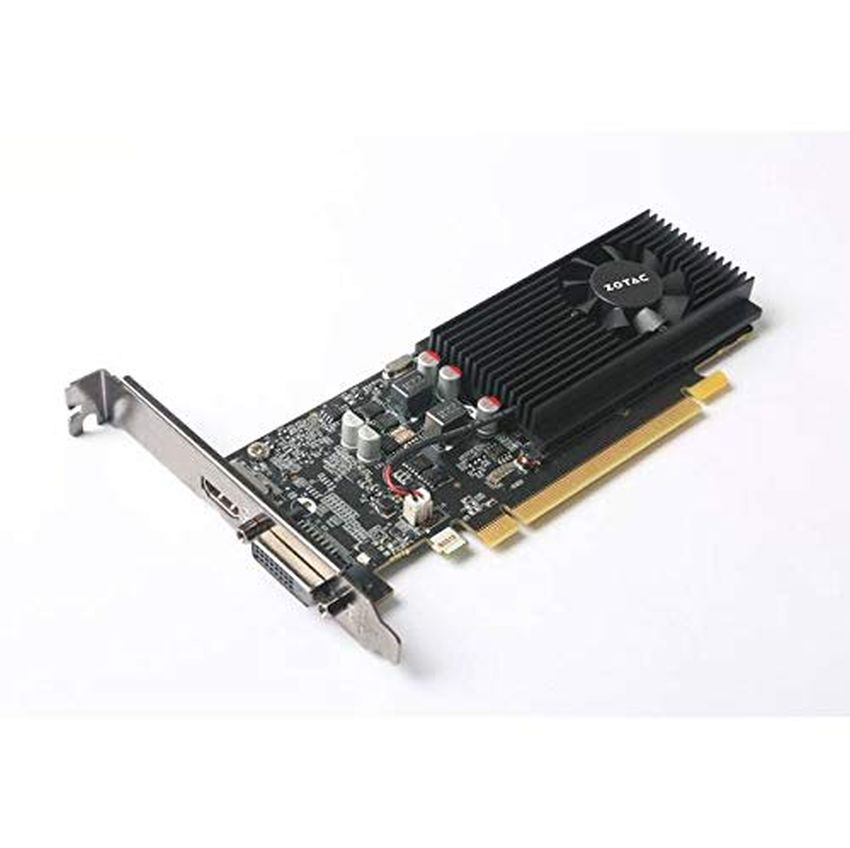 Because of all this, it costs around 7000 in India, meaning it is the cheapest one so far. It is not capable of running graphics heavy games like The Shadow of the Tomb Raider and the latest Assassin’s Creed, but it is still fine for games that were new some 4 to 5 years ago. Since it offers less performance, it is also smaller and takes up much less space. Therefore, it fits easily in the smallest of cabinets. Also, thanks to the Zotac NVidia option, it is very silent. All in all, casual gamers will benefit from this one the most. 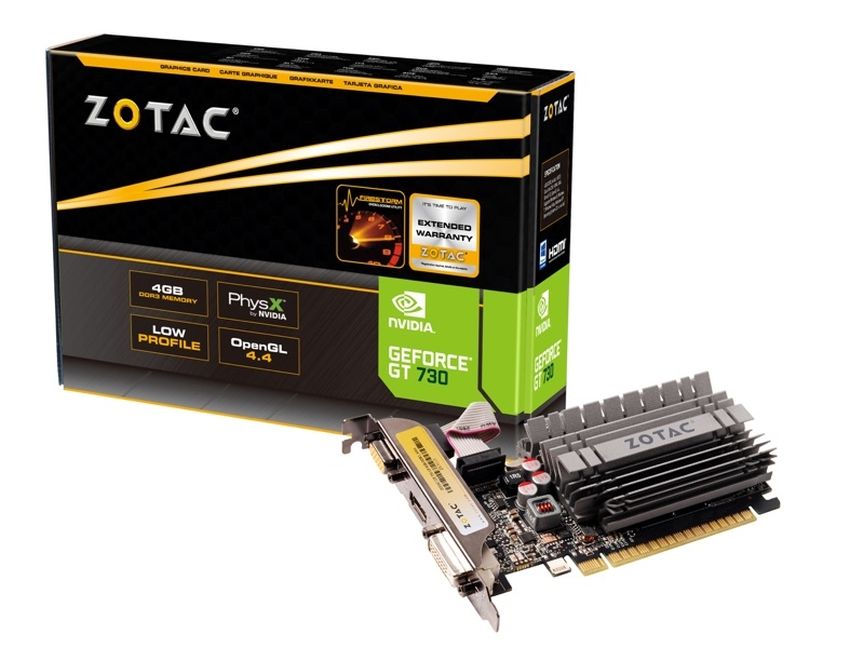 The last graphics card in out article is also the least powerful and capable. It is weaker than the number four GT 1030. However, this is not really a GPU meant for gaming. All computers need graphics cards, but the integrated one you get alongside the motherboard and processor are the worst ones you can have. This is why people who use computers but are not gamers still need a real GPU for other work they do on their PCs and laptops. 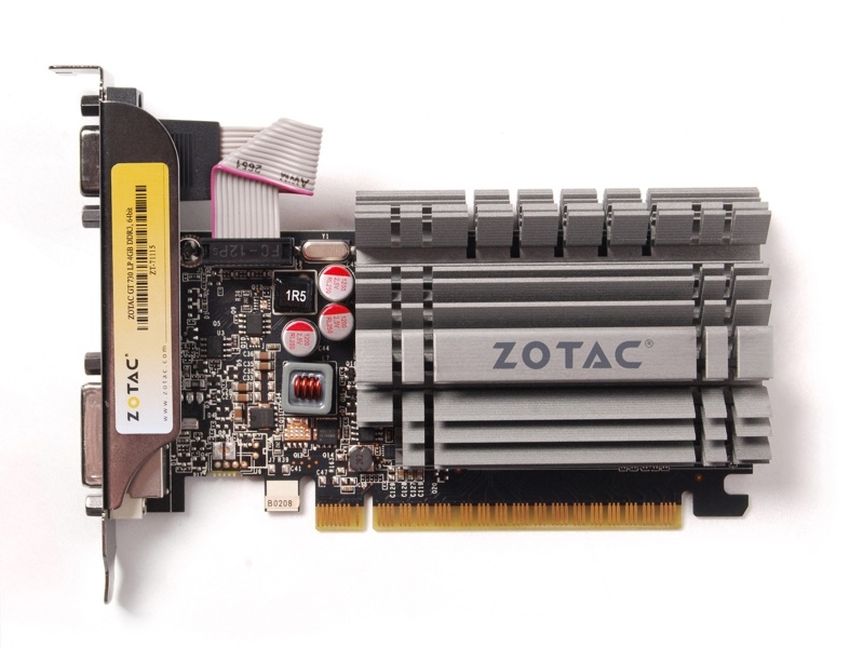 This is exactly where a small graphics card like this Zotac GeForce 730 comes in. You can easily watch Blue Ray 3D films with this card, and it is still good for small games, like the browser ones online. People who need a good office PC for everyday work might want to pay attention to this card as well, as it will make their machine a well-balanced business tool that can run all apps they may need.

There are three display ports on the card, a HDMI, a DL-DVI-D, and a VGA port. The card supports Quad Full HD 4K vision, and since it is the least powerful on the list, it also consumes the least amount of energy. Lastly, it is of course the cheapest one as well, and will not set you back at all.

This has been the list of the best 10000 Rs graphics cards you can buy in India in 2019. There is something for everyone, from serious gamers, to people who just need a good PC for work. Which one are you, and from which card would you benefit the most?